Homepage > Events > Pictures: Broad protests on occasion of the right-wing extremist “Heßmarsch” in Spandau, Friedrichshain and Lichtenberg on August 18, 2018

On August 18, broad protests of several alliances and civic initiatives were able to inhibit the neo-Nazi march glorifying the convicted National Socialist criminal and deputy of Adolf Hitler, Rudolf Heß. On that day, 3,000 people took a stance against right-wing extremism in Spandau. However, the neo-Nazis managed to collectively re-route their march to the districts of Friedrichshain and Lichtenberg, where, despite the very vocal opposition, they marched, glorifying National Socialism, with about 770 participants. Photo: F. Boillot/Berlin gegen Nazis

Preparation of protests and mobilization

When it was announced in the spring of 2018, that, as in the year before, neo-Nazis registered a demonstration commemorating the convicted National Socialist criminal Rudolf Heß in Spandau, several civic initiatives, groups, political parties, and alliances came together to plan and orchestrate broad protests (documentation of the protests in 2017). From the beginning, Berlin gegen Nazis supported the initiatives during the process of networking and planning. In the area surrounding the Spandau train station, protest events were registered in multiple locations, as well as at Wilhelmstraße 23, the location of the former prison where Rudolf Heß had committed suicide in 1987. 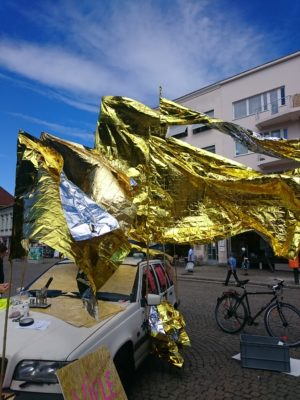 The local district council in Spandau issued a resolution against the march and called all residents to partake in the protests. In a joint press conference at Zitadelle Spandau on August 7, all collaborating alliances and initiatives publicly announced their protest events. During the church services of the Spandau-based churches and mosques, the public was informed about the upcoming neo-Nazi march.

On the Saturday prior to the march, the local party associations of SPD, CDU, die Grünen, die Linke, and FDP held a common information campaign on the market square, where also the artistst initiative Die Vielen prepared their Gegen Nazis Mobile.

In Berlin, the precise routes of right-wing extremist demonstrations are announced only about 48 hours prior to the march. Until then, only the registration of demonstrations and possible starting points are known to the public. This presents a structural obstacle to organizing civic protests and includes the risk that residents run unprepared into potentially violent neo-Nazis right on their doorstep. On occasion of the Heßmarsch in 2018, protesters were presented with yet another challenge.

The announcements of broad protests in Spandau lead to a second registration for the Heßmarsch to take place in the city center of Berlin. Thus, a huge success for the organization of civic protests in Spandau. The registration of protests inhibited the neo-Nazis glorification of National Socialism at the site of the former prison (Wilhelmstraße 23) prior to the event and forced them to come up with a plan B for their march. However, until the announced start of the march on Saturday at noon, it remained unclear which of the two registered routes the neo-Nazis would use, the one through a residential neighborhood in Spandau, or the one in Berlins city center. 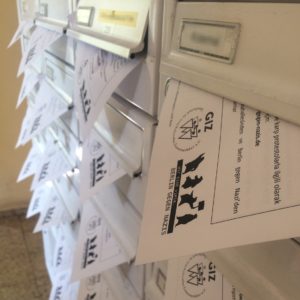 Only on the Thursday morning prior to the march, the two alternative routes were made public. Together with a partner organization within the Berlin gegen Nazis network, it was possible to notify the local residents of Staaken in Spandau with info flyers at short notice.

The information flyers were published in 13 languages and met with enthusiasm, many residents took part in the protest against the Heßmarsch at Spandau. However, capacities were lacking to simultaneously launch a similar info campaign in Friedrichshain and Lichtenberg.

Choreography of the protests in Spandau

Already at 9:00, protests commenced in Spandau with a short demonstration through the old town of Spandau organized by the local chapter of Bündnis 90/Die Grünen. 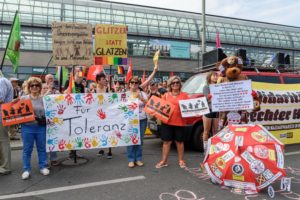 At 11:30, the demonstration organized by Spandauer Bündnis gegen Rechts started with about 2,500 participants at Bahnhof Spandau. The demonstration lead to the site of the former NS criminals prison. During the demonstration, a welcoming address by the mayor of Wunsiedel was read out.

Near Wilhelmstraße 23, at Melanchtonplatz, the Mahnwache für Toleranz und ein friedliches Miteinander – Gegen Rassismus, Antisemitismus und Islamfeindlichkeit organized by the protestant church of Spandau held a vigil with a wide range from 11:00. 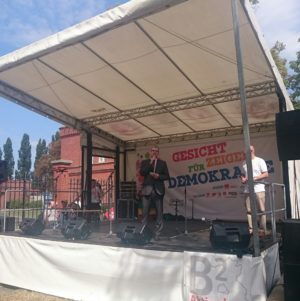 At Wilhelmstraße 23, the program continued during the entire afternoon with a Fest der Demokratie with very well-attended information desks, speeches, and music, organized by B²Aktion+ and supported by the local chapters of SPD, CDU, die Grünen, die Linke, and FDP, as well as DGB, Ver.di, IG Metall Jugend, Volksolidarität, AWO, Naturfreunde, Bezirksschülerausschuss Spandau, and Partnerschaft für Demokratie Spandau, amongst others. Speechers were given by the local mayor of Spandau, Herr Kleebank, as well as party members and the protestant bishop Herr Dröge as well as the chairman of DGB Berlin Brandenburg, Herr Hoßbach.

Action campaign One Cent against Nazis 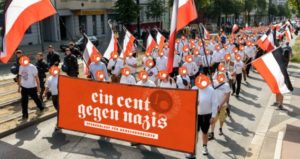 As part of the protests events, Berlin gegen Nazis successfully established their low-threshold action campaign Ein Cent gegen Nazis – Charity run for human rights. The campaign collected a grand total of more than 20,000 by about 1,200 donors to support the sea rescue missions of Sea-Watch. This stands as a strong signal for solidarity and humanity in the face of the current rise of neo-Nazi ideology. Please find an extensive documentation of the campaign here.

Neo-Nazi march and protests in Friedrichshain and Lichtenberg 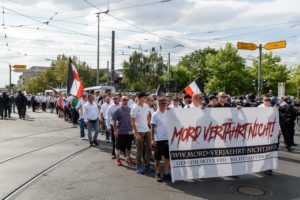 As described, the right-wing extremist organizers had a plan B up their sleeve for the march on August 18. Even if in hindsight, the well-coordinated re-routing to Friedrichshain seems apparent, the situation on August 18 was not as clear. At first, the neo-Nazis pretended to be marching their route in Spandau, they gathered with several participants at the starting point of the march and at Spandau train station, from where they collectively travelled by train to Alexanderplatz station. The majority of participants met at Olymiastadion station and joined there. 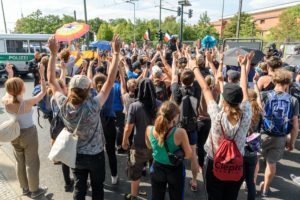 The neo-Nazis were thus able to hold their march from the starting point at Platz der Vereinten Nationen in Friedrichshain until Lichtenberg train station glorifying National Socialism. While the preparation of the protests against the march at Spandau spanned several months, residents in Friedrichshain and Lichtenberg were able to prepare a mere 48 hours in advance. However, several hundred people voiced their protest directly along the marching route of the neo-Nazis. Many participants of the protests taking place in Spandau as well made their way to Friedrichshain and Lichtenberg.

August 18 thus holds a two-fold résumé: Successful protests in Spandau, but at the same time a successful neo-Nazis march in Friedrichshain and Lichtenberg. This result will have to be evaluated with regard to a probable Heßmarsch likely scheduled for August 17, 2019, the 32nd anniversary of the death of Rudolf Heß.

Pics of the day, protests against the Heßmarsch on August 18 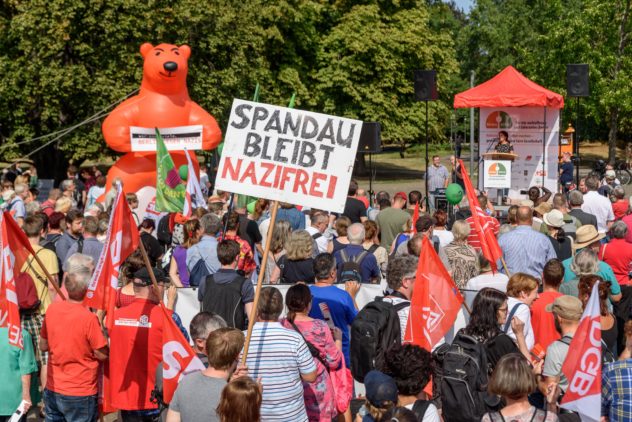 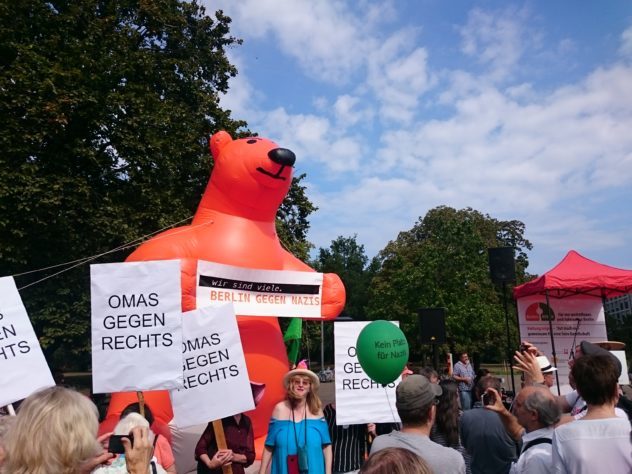 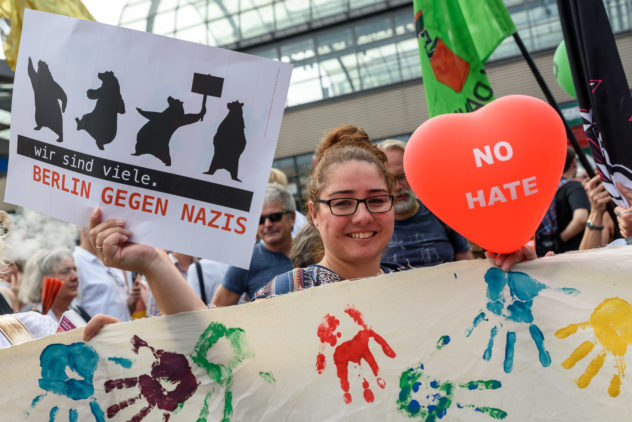 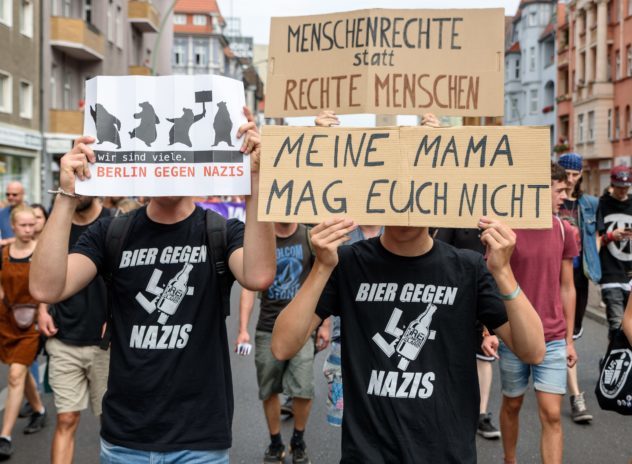 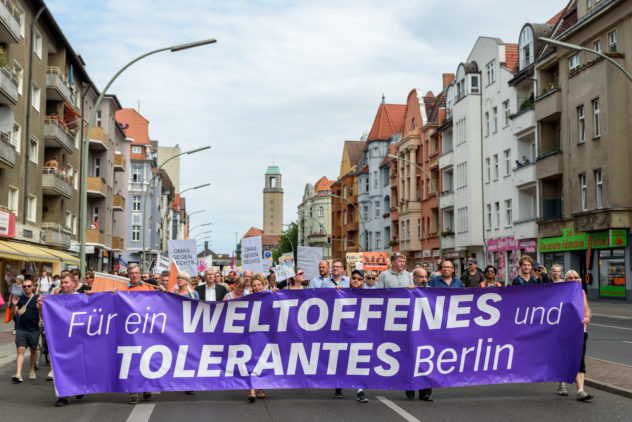 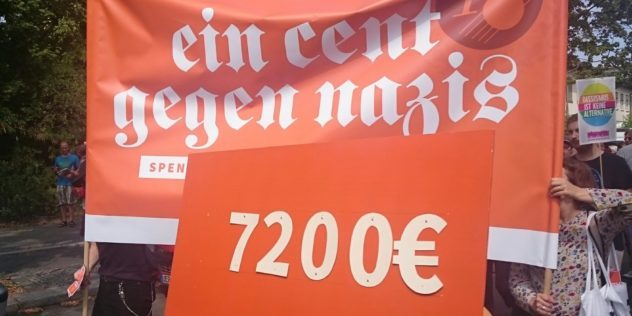 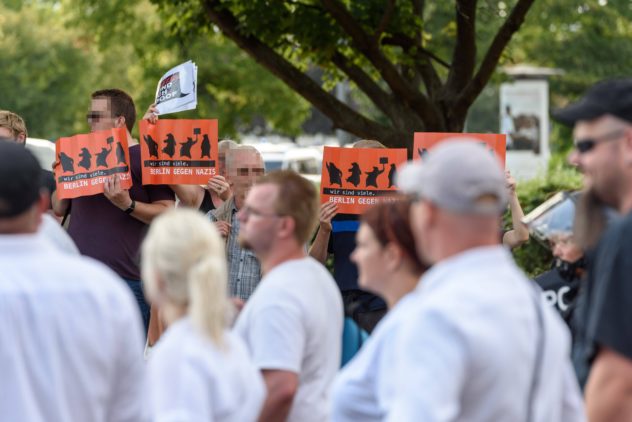 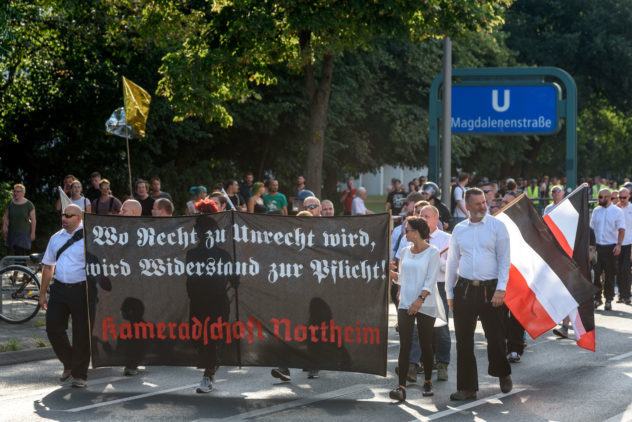