Homepage > News > Documentation: Keep your Distance Against the Right – Positioning and Protests 2020, Part 2

From the end of June to November, residents, organizations, initiatives and alliances positioned themselves with banners, campaigns and rallies against right-wing, conspiracy-ideological gatherings in Berlin-Mitte and other districts. We document the amazing engagement under pandemic conditions. Part 2 – Photo: Berlin against Nazis, 01.08.2020

While the right-leaning gatherings of Berlin groups ebbed away in June, an individual with a high social media reach and very radical statements entered the conspiracy ideological “stage” of Berlin. First with appearances on the lawns in front of the government buildings, then with car parades through the city. These motorcades ended at Lustgarten. There, from June on, a few hundred supporters gathered every weekend to celebrate the aggressive conspiracy-ideological speeches delivered from the steps of Altes Museum.

For this reason, Staatliche Museen zu Berlin – Preussischer Kulturbesitz decided at the end of June to permanently hang a giant banner from Altes Museum with the inscription “Für Weltoffenheit und demokratische Werte – Gegen Rassismus, Antisemitismus, Nationalismus und Hetze”. At the same time, a small group of committed people protested on several June and July weekends with the support of the alliance Die Vielen in front of Altes Museum against the conspiracy-ideological gatherings. Shortly thereafter, these were banned by the assembly authorities. The banner hung at the Old Museum until early December. 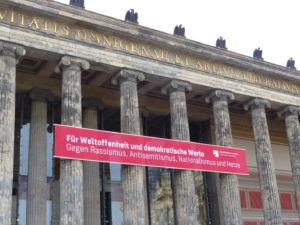 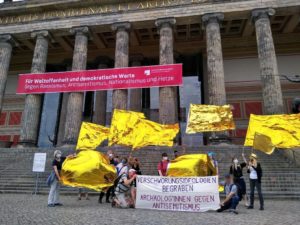 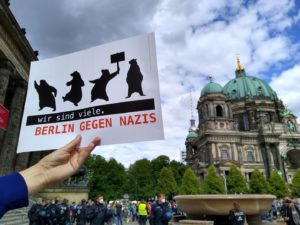 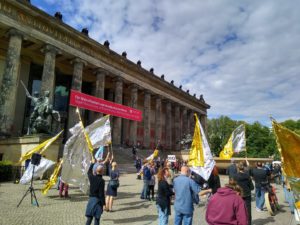 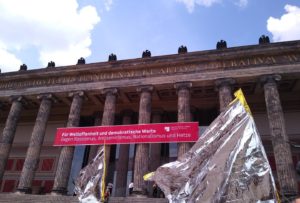 In July, a nationwide mobilization of groups on the conspiracy-ideological spectrum, especially from southern Germany, started at relatively short notice, to gather on  August 1 in Berlin. Berlin-based initiatives and alliances counter-mobilized in the middle of the summer vacation and prepared numerous counter-protests under pandemic conditions in Mitte.

The residents’ initiative Anwohner*inneninitiative für Zivilcourage – Gegen Rechts once more distributed an information flyer in their neighborhood. Under the slogan “Abstand halten Gegen Rechts”, a letter choreography was performed at a neighborhood rally on August 1. The Alliance Bündnis Aufstehen gegen Rassismus and Berliner VVN-BdA organized a rally to protect the monument to the Sinti and Roma of Europe murdered under National Socialism. At Pariser Platz, the alliance Berliner Bündnis gegen Rechts held a protest rally. Berliner Omas gegen Rechts also planned a “protection rally” at the Memorial to the Murdered Jews of Europe. Due to public pressure from civil society on politics, fed by the indignation that a large conspiracy-ideological march with partly anti-Semitic expression which was to pass directly by the Holocaust Memorial, there was a change of route at short notice. Omas gegen Rechts then protested with several hundred Berliners on Leipziger Straße. 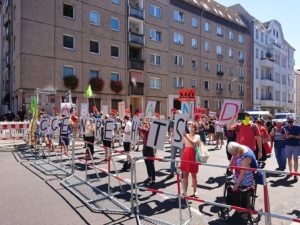 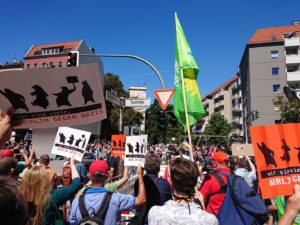 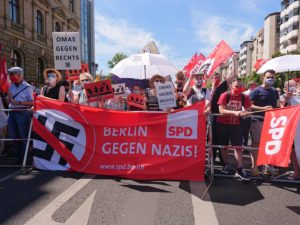 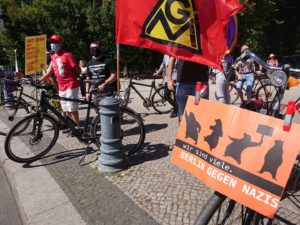 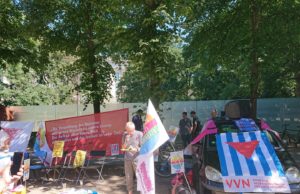 The participants in the conspiracy-ideological demonstration through Mitte and the following rally in Tiergarten on August 1 clearly outnumbered those of the counter-protests. The participants in the responsible, rather symbolic protests of Berlin’s civil society faced an aggressive crowd of several 10,000 people, who euphorically celebrated the refusal of standoffs and protective face masks. The counter-protest was insulted and partly also directly harassed.

A rerun the conspiracy ideology rallies with nationwide mobilization was announced for August 29, and supportes from all far-right spectrums quickly jumped on board. Berlin civil society decided against mass mobilization for counter-protest due to the dangers of the COVID-19 pandemic. Once again, responsible symbolic protest was planned.

The advance assessment of Mobile Beratung gegen Rechtsextremismus Berlin – MBR drew attention to the alliance character of the conspiracy ideological event, the mass participation of right-wing extremists, as well as the very high potential for violence. The assembly authorities banned the registrations, but were overturned by the Higher Administrative Court. Once again, more than 10,000 people gathered in the government district. The initiatives and alliances organizing the counter-protest decided to move the renewed protective rallies for the memorials in the Tiergarten to Bebelplatz for security reasons at short notice. Here, on August 29, a central counter-protest rally  with physical distancing and protective face masks took place with several hundred participants. At the same time, there were small rallies and spontaneous counter-protests along the conspiracy-ideological march route and at Platz des 18. März.

In the run-up to August 29, the alliance Bündnis für ein weltoffenes und tolerantes Berlin had called to join their online campaign under the slogans: “Keep your distance against the right” and “Hate harms the soul” in order to encourage Berliners to take a stance regardless of their location. As part of this campaign, Berlin gegen Nazis documented all positioning and protests of the spring in Berlin for the nationwide public on Twitter and Facebook on August 29. 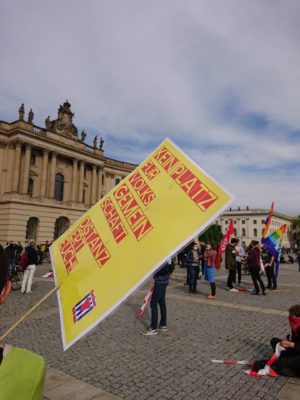 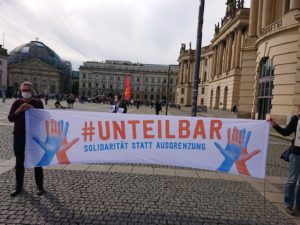 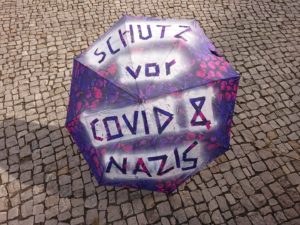 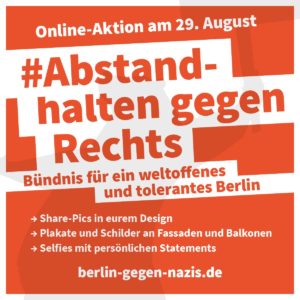 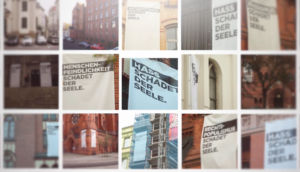 After a somewhat quieter September, October and November again saw a large number of smaller and larger, sometimes aggressive conspiracy ideology gatherings in Berlin-Mitte, which were accompanied by small counter-protests. In Charlottenburg, Pankow and Spandau, however, there were also strong counter-protests by residents on these occasions.

In Charlottenburg, an alliance of local left-wing initiatives and businesses as well as neighboring organizations had already formed in the summer months. They repeatedly demonstrated against the main protagonist of the conspiracy-ideological meetings at Lustgarten, who lives in the neighborhood. His store had developed into a meeting place for aggressive individuals, including the far-right spectrum. 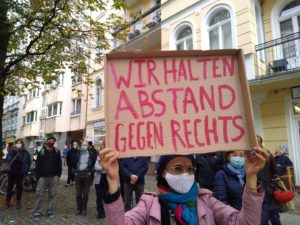 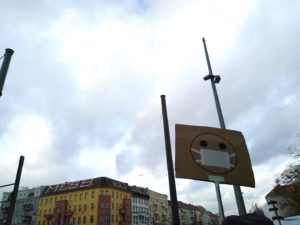 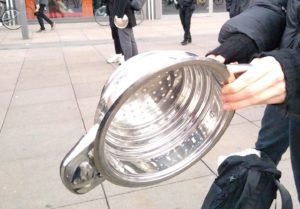 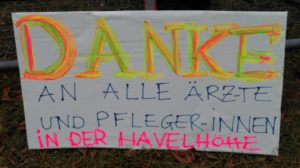 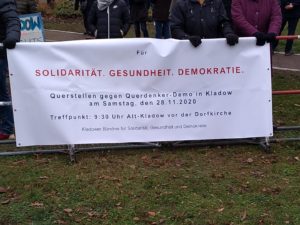 On November 18, there was a very rapid nationwide mobilization of conspiracy ideological and right-wing extremist spectrums for rallies around the Reichstag. Their goal was to render the Bundestag and the Bundesrat incapacitated in order to prevent the passage of a new infection control law. After the activation of the ban mile around the parliament and Bundesrat buildings, violent riots broke out against the police on Straße des 17. Juni. Here, about 10,000 people gathered on a regular weekday. There were also small symbolic counter-protests against these conspiracy ideological gatherings on Pariser Platz and directly at the Reichstag building.

In 2020, Berlin civil society consistently took a stand against right-wing extremism, racism, anti-Semitism, and conspiracy ideologies under very difficult conditions. If the Covid 19 pandemic is contained in 2021, large protests against further conspiracy ideology gatherings in the center of Berlin are to be expected.

Part 1 of this documentation can be found here.