Homepage > News > Documentation: Keep your Distance Against the Right – Positioning and Protests 2020, Part 1

From April to June, residents, organizations, initiatives and alliances positioned themselves with banners, actions and rallies against right-wing, conspiracy-ideological gatherings of Berlin-based groups at Rosa-Luxemburg-Platz and the surrounding area. We document this amazing commitment under pandemic conditions. Part 1 – Photo: Florian Boillot / Berlin gegen Nazis, 23.05.2020

On April 25, the first powerful positioning took place against the rapidly growing right-wing open assembly at Rosa-Luxemburg-Platz. Residents of the neighborhood, Volksbühne Berlin together with the alliance Unteilbar, as well as local art galleries showed their rejection under the slogans #rosaluxantwortet and #wirsindnichteurekulisse. Volksbühne covered its lettering on the building.

The right of assembly was very much restricted due to government measures to contain the pandemic. Nevertheless, at that time around 1,000 people gathered weekly at Rosa-Luxemburg-Platz without official registration, including many right-wing extremists.

The positioning of Volksbühne Berlin and the local residents were repeated on several weekends. On May 8 and 9, the protests were integrated into the campaign “Glänzende Aktionstage” organized by the alliance Die Vielen on occasion of the 75th anniversary of Victory in Europe Day. In the course of 2020, Volksbühne positioned itself a number of times – whenever conspiracy-ideological groups returned to Rosa-Luxemburg-Platz. 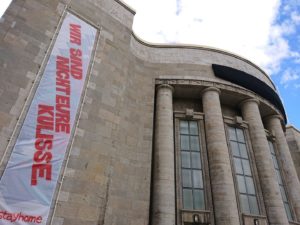 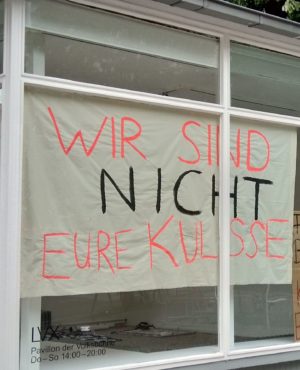 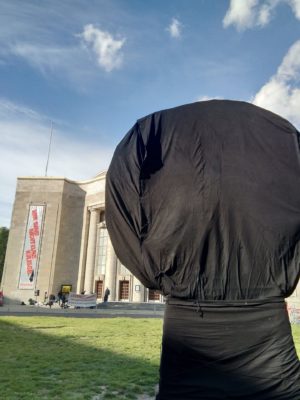 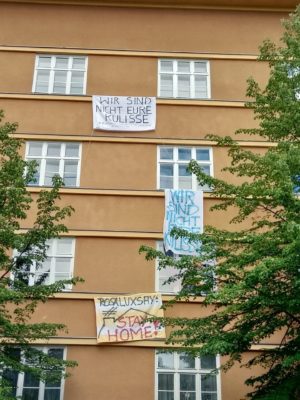 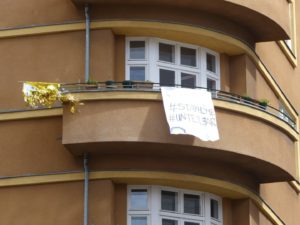 Even before local residents and Volksbühne took a stance, the first small counter-protests by left-wing initiatives took place in mid-April. As soon as the initial restrictions on the right of assembly were relaxed, an alliance of initiatives, parties, youth organizations and many other organizations, such as Aufstehen gegen Rassisms around the Bergpartei, formed. Under the motto #reclaimrosaluxemburgplatz, several rallies were announced in front of Volksbühne and the neighboring Schendelpark. These creative counter-protests under pandemic conditions were small in numbers but very effective. A humorous protest format quickly developed as well: A reptilian counter-protest in lizard costumes was formed in imitation of a conspiracy narrative according to which extraterrestrial reptiles rule the world.

In mid-May, the right-leaning gatherings had to look for new locations, since Rosa-Luxemburg-Platz was occupied by these counter-protests. The conspiracy-ideological groups thus lost a spatially defined urban space in a residential district with a symbolic backdrop. Until December, committed people protested Berlin-wide as lizards/reptiloids with bicycle parades, small rallies and performances on almost every weekend against the conspiracy-ideological gatherings. 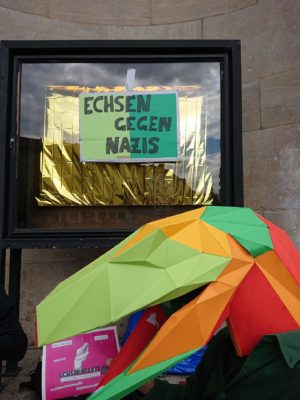 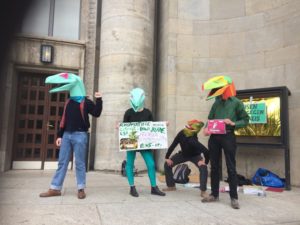 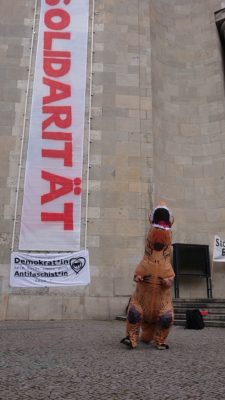 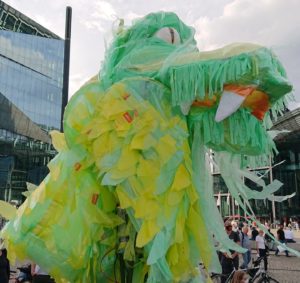 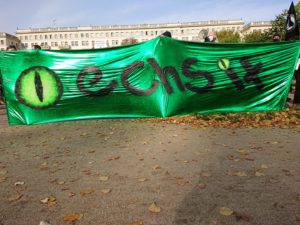 On May 9, an attempt by the conspiracy-ideological participants to assemble at Rosa-Luxemburg-Platz failed. As a result, 1,000 participants gathered at Alexanderplatz, among them a large group of very aggressive right-wing extremist hooligans. Chants of “Volksverräter”, “Widerstand” and “Wir sind das Volk” led to riots against the police on Alexanderplatz. In the following weeks, there were repeated attempts to reestablish the right-leaning rallies on Alexanderplatz or return to Rosa-Luxemburg-Platz.

Counter-protests by almost all Berlin-based alliances and initiatives against right-wing extremism, such as the Berlin alliances Alliance Bündnis gegen Rechts and Reclaim Club Culture, but also spontaneous unions of other residents, e.g. from Memhardtstraße, made these attempts fail. The Berlin conspiracy-ideological groups now tried to hold their meetings in the government district and Unter den Linden. In June, however, these died down, as the sprawling locations offered no palpable anchor point for the gatherings. 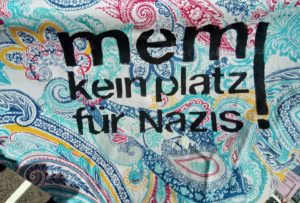 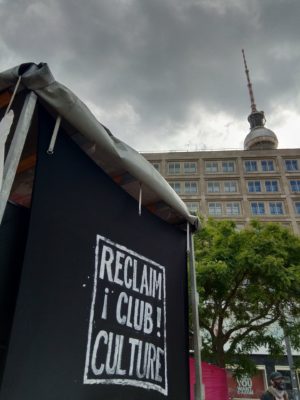 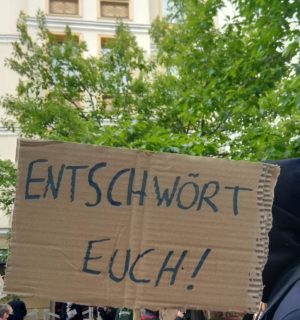 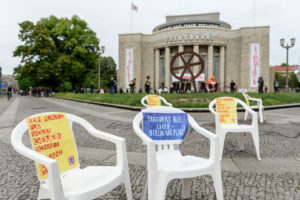 At the beginning of May, the residents’ initiative Anwohner*inneninitiative für Zivilcourage – Gegen Rechts at Torstraßenkiez published a multilingual flyer. It provided information about the right-leaning meetings and encouraged the neighborhoods in Mitte to take a stance.The residents’ initiative used the slogan “Keep your distance against the right” for the first time. In the following months, this slogan became the basis of many protests in Berlin and beyond. It captures the organizational difficulty of counter-protests under pandemic conditions as well as the necessary positioning against the right-leaning gatherings.

On May 23, #ABSTANDHALTENGEGENRECHTS was put into action at Rosa-Luxemburg-Platz with about 100 representatives of initiatives and alliances in a positioning campaign. Together with the ensemble of Volksbühne Berlin, the residents’ initiative Anwohner*inneninitiative für Zivilcourage – Gegen Rechts, DGB Berlin-Brandenburg, Die Vielen, the Berlin chapter of Omas gegen Rechts, Berliner VVN-B.d.A, and the alliance Bündnis für ein weltoffenes und tolerantes Berlin, a successful positioning was achieved. Those present were also representative of all those who practice #Abstandhaltengegenrechts in their everyday lives. Volksbühne also positioned itself with new banners and the clear statements: „Kein Platz für Antisemitismus“ und „Kein Platz für Verschwörungsideologien“. 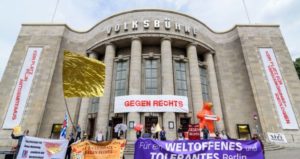 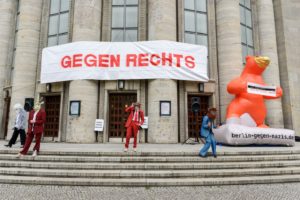 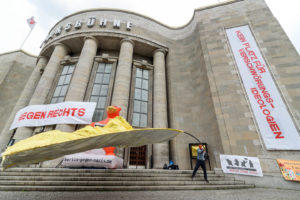 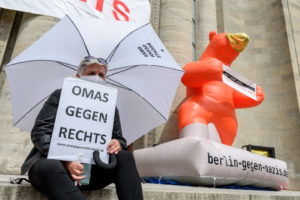 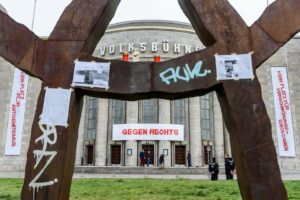 On June 6, the Akademie der Künste also took a stance together with Die Vielen against an attempt by a number of Berlin groups to establish larger conspiracy-ideological gatherings in the government district. During which it came to the cooperation or a coexistence without demarcation of right-wing leaning groups, supportes of Reichsbürger ideology and right-wing extremists. The Akademie der Künste used the “GEGEN RECHTS” banner of the Volksbühne of May 23 for its positioning.

The 2nd part of this documentary will be available tomorrow.