The right-wing extremist organization “Wir für Deutschland (WFD)” calls to march from Hauptbahnhof through the center of Berlin from 14:00. The route of the demonstration leads from Europaplatz via Invalidenstraße, Ackerstraße, Torstraße, Novalisstraße, Tieckstraße, Chausseestraße, Invalidenstraße back to Europaplatz. The slogan of the right-wing extremist demonstration is “Day of the Nation”. The residents’ initiative “Anwohnerinitiative für Zivilcourage - Gegen Rechts” registered a counter protest event in their neighborhood. The location of the event has changed.

News: Second registration for a right-wing march of WfD on October 3, 2018, in Mitte / Friedrichshain

In addition to the first WfD-march at 2 pm from Central Station there is a second registration for the area Mitte / Friedrichshain. This right-wing march is registered from 5.30 pm to 11.59 pm on the following route: Alexanderstraße (Teacher’s House / bcc) – Karl-Marx-Allee – Warschauer Straße – End at: S Warschauer Straße

View the maps online via our Smartphone-App „Gegen Nazis“ ,with optional service of display of your current location. 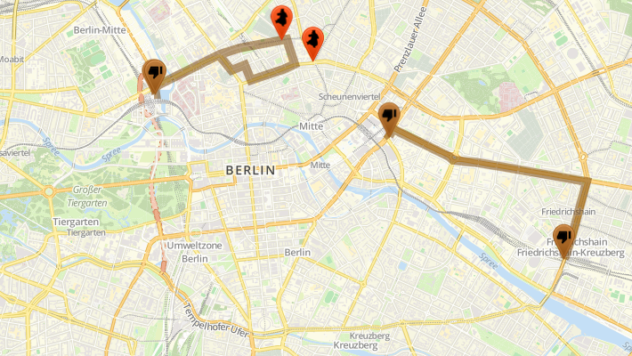 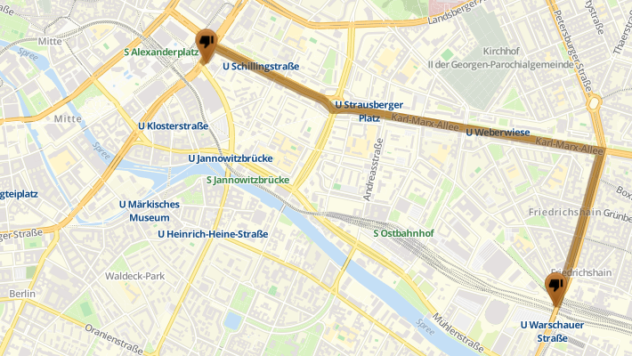 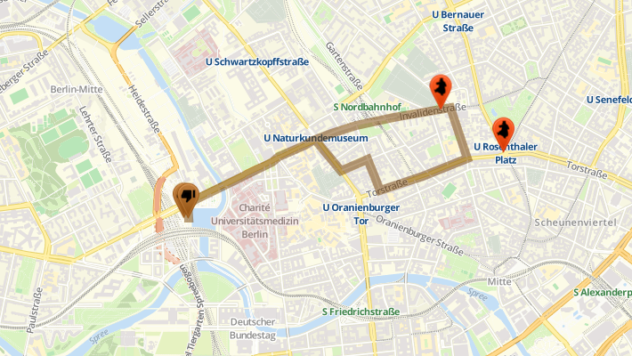 Flyer for the protest event of the residents’ initiative.

During the demonstration of March 4, 2017, we were personally attacked and even spat at by Nazis. We could not let that happen and thus formed a residents’ initiative. We actively and visibly foster democracy and the peaceful coexistence of our community. Our Kiez is colorful and will remain as such. 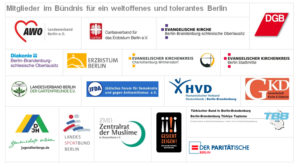 Members of the initiative

„On occasion of the announcement by right-wing extremist groups to lead a demonstration from Berlin Hauptbahnhof on German Reunification day. The documentation of such demonstrations clearly indicates that speeches during these events campaign against groups of persons who do not comply with an alleged homogeneous Germany. We cannot accept that but wish to set a signal and protest. Our goals are solidarity and social cohesion on the streets and places, in classrooms, work places and churches, arenas and malls of our city. We are advocates for such a democratic society!

We support the protest event organized by „Anwohner_innen-Initiative für Zivilcourage – Gegen Rechts“ and call to join their protest.” 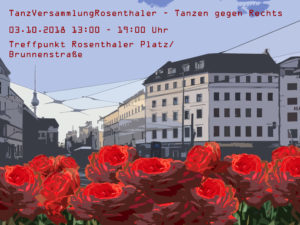 A further protest event is scheduled to start from 13:00 at Rosenthaler Platz on Brunnenstraße. A stationary rave under the slogan “Tanzen gegen Rechts” is organized by club scene activists.

Mobile Beratung gegen Rechtsextremismus Berlin (MBR) has published an assessment of the demonstration of October 3, where it states:

On occasion of the German Reunification day on October 3, 2018, right-wing extremists are planning to organized a large march in Berlin. The group “Wir für Deutschland” has been mobilizing for months to attend their “major” demonstration under the slogan “Tag der Nation”, which is scheduled to start on Europaplatz at Hauptbahnhof. The event was registered for 1,000 participants. In the light of the events of Chemnitz and Köthen, it is hard to predict how realistic this number is. Currently, it seems unlikely that the organizers will manage to mobilize the social dynamic for their event, but the possibility cannot be excluded either.

Due to the milieus expected to attend, it is likely that an increased potential for aggression will determine the atmosphere of the event. It is not new that right-wing extremists claim October 3rd as a holiday and appeal to a strengthening of national pride, as could be observed during the years 2012 to 2014 with the events under the slogan “Tag der Patrioten”. (…)

Mobilization for the event in October started as early as January, 2018. Despite constant and lively mobilization on social media, confirmed participants on Facebook had reached only 600 as of August. Meanwhile (as of September 13), the numbers increased to 1,000 participants, with 3,000 interested parties. Judging from past events of WfD, the expected participants on October 3, are likely to come from the familiar spectrum of supporters of the demonstrations under the slogan “Merkel muss weg“:right-wing extremists organized within comradeships, NPD, party members of “Der III. Weg“, of the „Identitären Bewegung“, adherents of “Reichsbürger” ideology, supporters of further right-wing extremist factions, football hooligans, members of AfD’s „Patriotische Plattform“, as well as xenophobic groups against Islam and refugees. The NPD’s Bundesorganisationsleiter, Sebastian Schmidtke, calls to join.

Regardless of the occasion of the current demonstration, meanwhile a milieu of supporters has manifested who are constantly willing to be mobilized to attend anti-refugee or right-wing extremist gatherings in Berlin. Thus, yet again the prognosis will be a number of several hundred participants.