For March 3, the right-wing extremist organization “Wir für Deutschland (WFD)” yet again calls to join their demonstration from Hauptbahnhof through Berlin-Mitte at 15:00. The demonstration is taking place under the slogan “NEIN zur GroKo (Patriotische Frühlingsoffensive)”. Two events to counter protest have been registered, Berlin gegen Nazis will offer a balloon action campaign for all Berliners at each event. The route of the right-wing extremist demonstration has been announced and will lead from Washingtonplatz (Hbf) to Alexanderplatz via Friedrichstraße, Torstraße, Rosenthaler Straße.

The alliance Berliner Bündnis für ein weltoffenes und tolerantes Berlin calls to unite and raise our voice against hatred and racism and vouch for Berlin’s open-mindedness and solidarity.

GEW’s samba combo, choirs, speeches, posters, balloons, hot tea and cake will support us to show that we live in an open-minded society free from hatred. Because we are convinced, that a democratic society has to defend itself against intolerance, racism, anti-Semitism, and nationalism.

Furthermore, the alliance offers three guided tours on the topic through Wilmersdorf (FB-Event), Kreuzberg (FB-Event) and Mitte (FB-Event), including the option for a joint travel to the counter-demonstration in Mitte. Further information can be found on the alliance’s new website: Bündnishomepage.

The neighborhood initiative Anwohnerinitiative für Zivilcourage – Gegen Rechts of the neighborhoods of Rosenthaler Vorstadt and Spandauer Vorstadt will yet again host an event in their neighborhood at a place where the demonstration route might likely pass by. They are mobilizing all neighbors to join them on 16:00 at the corner of Johannisstraße and Friedrichstraße.

The neighborhood initiative was formed in the spring of 2017, when two of the demonstrations under the slogan “Merkel muss weg” marched through their neighborhood. On July 1, they managed to organize three events with a diverse program (Dokumentation). During the last right-wing demonstration by WfD on September 9, 2017 (Dokumentation), the initiative has also hosted an event. And yet again, event if the demonstration route will not affect their neighborhood directly, the residents will set a signal no matter what.

Under the slogan „Luftballonaktion gegen Neonazis“ (FB-Event), Berlin gegen Nazis will present a balloon action campaign at both protest events. Berlin gegen Nazis will distribute several hundred balloons, which will be simultaneously released to crowd the sky above Berlin to show that we are many – against right-wing extremism, racism, and anti-Semitism.

Mobile Beratung gegen Rechtsextremismus Berlin (MBR) has published an assessment of the current situation regarding the right-wing extremist demonstration on March 3, here is an excerpt:

WfD has been organizing the series of demonstrations under the slogan “Merkel muss weg” since 2016, which managed to gather a crowd of more than 3,000 supporters at the initial event on March 12, 2016. The upcoming demonstration is part of that series, it is, however, taking place under the slogan “Nein zur GroKo”.

Meanwhile, the right-wing extremist organizers see themselves faced with several problems: On the one hand, in Berlin, they apparently fail to mobilize as many supporters as during the so-called “refugee crisis”.

Furthermore, the upcoming event on March 3 has already been renamed a few times. First, it was entitled “Dexit jetzt”, then “Patriotische Frühjahrsoffensive”, which has recently been swapped for “Nein zur GroKo”. This might well be interpreted as randomness regarding the topics by the clientele. It is not convincing that there exists a serious issue to be tackled with the demonstration; rather, this event can be assessed as a further repetitive event in the declining series of demonstrations.

Nevertheless, meanwhile a social milieu has formed that can constantly be mobilized to travel to Berlin for anti-refugee and right-wing extremist events. Thus, it is likely that this time again, some hundred supporters will show up, coming mostly from the organized right-wing extremist scene and comradeships, party members of NPD and “III. Weg”, from the “Identitäre Bewegung”, protagonists from the spectrum of the “Reichsbürger” movement, football hooligans, members of AfD’s “Patriotische Plattform” as well as supporters of right-wing extremist factions and xenophobic initiatives.

view the map online via Smartphone-App „Gegen Nazis“ ,with optional service of display of your current location. 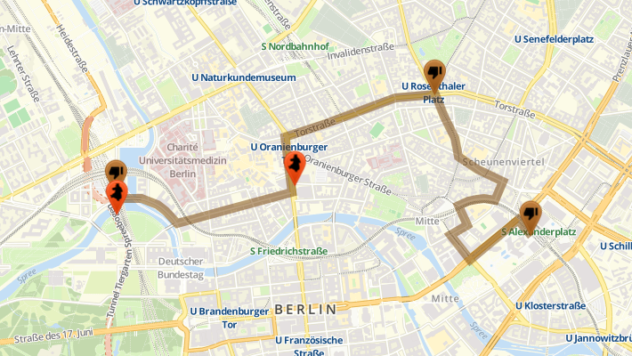