The sitxth gathering of the right-wing extremist organization “Wir für Deutschland (WFD)” since March 2016, turned out to be rather small. Approximately 500 participants marched through Berlin’s Mitte district, chanting racist slogans. Unfortunately, the counter-protests turned out to attract fewer people as well. However, three events organized by the neighborhood initiative “für Zivilcourage - Gegen Rechts in der Spandauer Vorstadt” who yet again managed to obtain a change to the right-wing extremist demonstration’s marching route and attracted about 400 people despite the bad weather clearly were the day’s highlight. A few snaps of the events can be found here. 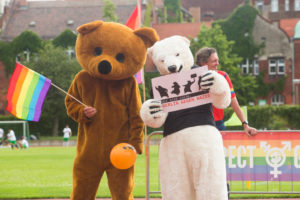 In the morning of July 1, Berlin gegen Nazis hosted two photo shoots at sports events in Berlin Mitte. The 8. Interkulturelle Fußballturnier von Narud e.V. under the slogan „Fluchtursachen bekämpfen“ in the Berlin district of Wedding, as well as the Respect Gaymes 2017 organized by LSVD – Lesben- und Schwulenverband Berlin-Brandenburg e.V.  posed together with “Berlin gegen Nazis” fuzzy bear against the right-wing extremist demonstration taking place in the afternoon and showed their solidarity with all counter-protestors. 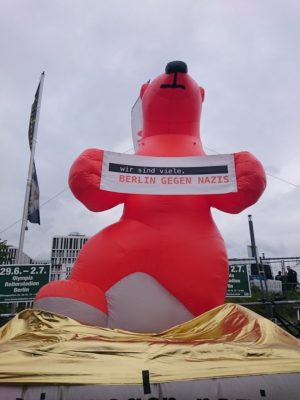 With more than 300 participants, the demonstration of Berliner Bündnis gegen Rechts, a joint initiative of diverse associations, and leftist as well as antifascist groups, set a clear sign against right-wing extremism marching through the neighborhood of Spandauer Vorstadt from Rosenthaler Platz towards Berlin’s main train station. The demonstration lead to an event organized by the initiative at Hauptbahnhof, right next to the right-wing extremist’s demonstration starting point. Berlin gegen Nazis’ own inflatable bear was positioned within eyesight of the right-wing extremists. Many Berliners made use of Berlin gegen Nazis clap banners to make sure their protest was heard. Due to the change of the marching route, which was only announced at short notice, there were hardly any prepared counter-protests by neighbors along the route. Berlin gegen Nazis has yet again pointed out this problematic practice of a lack of information of residents affected by right-wing extremist protests. As rbb reports here („Berlin will künftig Ort und Zeit von Demos veröffentlichen“), a change to the law regarding the right to gatherings is presently discussed. 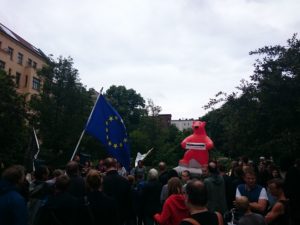 Despite the fact that thus, the residents of Spandauer Vorstadt were not directly affected anymore by the demonstration, the events were well-attended and successful, despite the averse weather conditions. All in all, more than 400 participants took part and set a clear sign against right-wing extremism. The whole neighborhood, including many children, joined to take the streets against right-wing extremism. The atmosphere of solidarity and friendship was complimented with a diverse program of couch surfing and drum sessions on Ackerstraße, choir concerts and readings of biographies of Jewish neighbors during the Nazi regime on Koppenplatz, as well as literary and musical program at Gipsstraße/Auguststraße. On Monbijouplatz, at the event organized by “Berliner Bündnis für ein weltoffenes und tolerantes Berlin”, speeches were given by spokespeople of the German Trade Union Confederation, the Evangelical Church in Germany, the AWO public welfare office Mitte, as well as Türkischer Bund Berlin Brandenburg – TBB. At the neighborhood initiative’s events, speeches were given by Bundestagsvizepräsidentin Petra Pau (Die Linke) as well as by local politicians in the district of Mitte, Eva Högl (MdB/SPD), Özcan Mutlu (MdB/ Bündnis 90/Die Grünen) and Ms Jasper-Winter (MdA /FDP).

Berlin gegen Nazis supported the neighborhood initiatives in the planning and execution of the counter-protests, and is hoping to be able to support further initiatives protesting “Wir für Deutschland (WfD)”’s seventh march under the slogan “Merkel muss weg”, announced to take place on September 9, 2017.

Pics of the day: Protest against the right-wing extremist demonstration of July 1, 2017 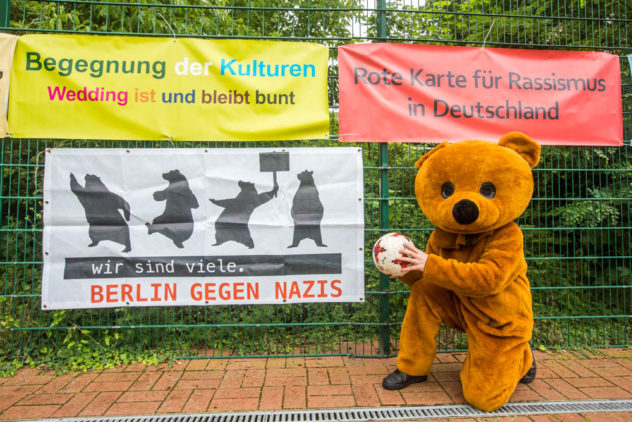 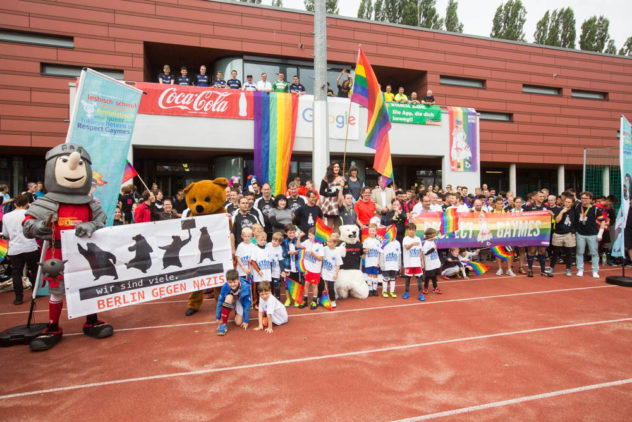 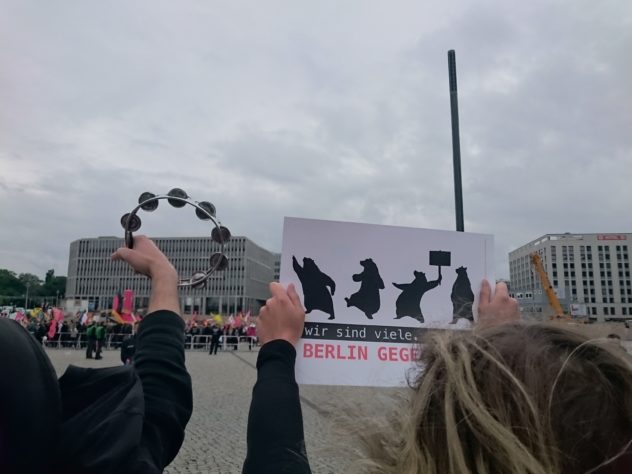 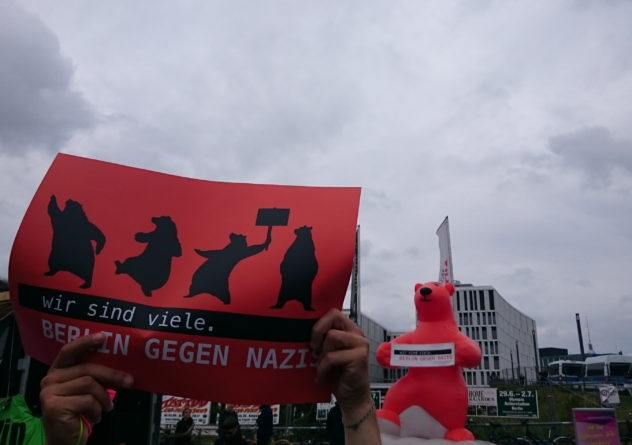 We are many. BERLIN GEGEN NAZIS – Photo: Berlin gegen Nazis 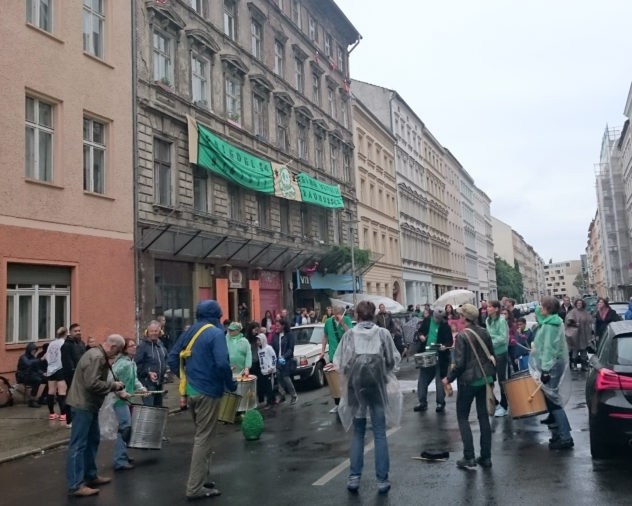 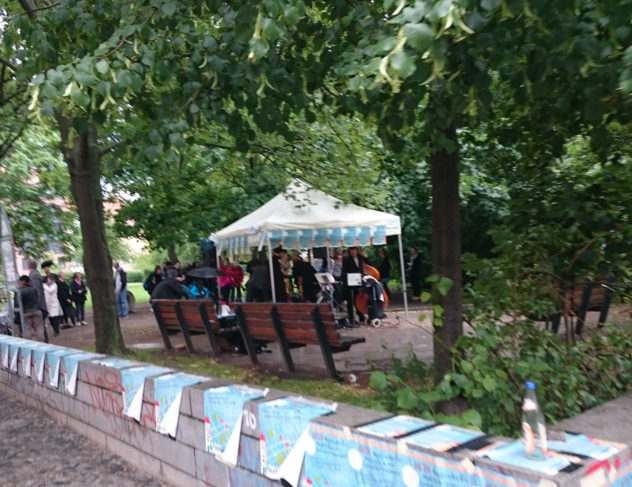 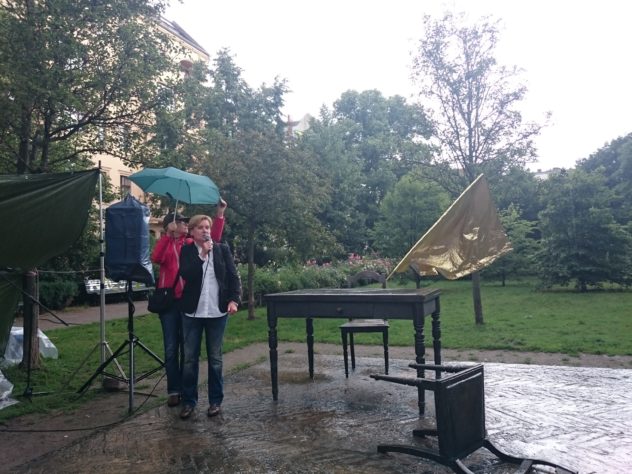