In 1966, the United Nations declared March 21 as the „International Day for the Elimination of Racial Discrimination“. In 1979, the commemoration of the day was complimented by the invitation to host events of solidarity with the opponents as well as the victims of racial discrimination. In Germany, these activities have been coordinated by the association “Interkultureller Rat in Deutschland e.V.” since 1994, and, since 2014, by a foundation established solely for the cause. In Berlin, there are numerous events taking place this year, of which we would like to present a selection: 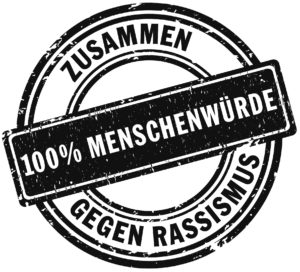 The website of the Foundation for the International Weeks against Racism provides useful background information on the International Day for the Elimination of Racial Discrimination, as well as details on all scheduled events in Germany.

The Amadeu Antonio Foundation has conducted an interview with Britta Graupner, head of the Aktionswochen. As the focus of this year’s weeks of action, Ms Graupner states:

We continue to focus on “100% human dignity – united against racism”, as human dignity may never be subsumed under any political or ideological cause. Of course, we encourage all local groups to specify their focus according to their needs. We already see that, this year, an emphasis will be put on migration as well as the increase of right-wing populism. Which was to be expected, with regard to the current political discourse and the upcoming national elections.

Opening session on Monday, March 13, 11:00 to 13:00 with a demonstration at the Brandenburg Gate, organized by our partner association Gesicht Zeigen!, including a Social-Media-Challenge #DeinGesichtgegenRassismus. Further events by Gesicht Zeigen! can be found here. We would like you to especially take note of the reading by Irmela Mensah-Schramm and José Paca titled „Mein Kampf gegen Rechts“ on March 15, 19:00 at S-Bahn-Bögen Bahnhof Bellevue, Flensburger Str. 3.

On Sunday, March 12, 14:30 to 18:00, an early opening session is taking place in Wedding and Moabit under the slogan „Zusammen(-kommen) gegen Rassismus“ at Zille-Klub / Zille-Haus, Rathenower Straße 17. Almost fifty local initiatives will partake in this first-time event taking place in the Berlin districts of Moabit and Wedding. There will be more than fifty events taking a stance against right-wing opinions and everyday racial discrimination. The organizers provide you with detailed information here: Misch mit! – Netzwerk Engagement und Nachbarschaft, Demokratie in der Mitte – Partnerschaften für Demokratie in Wedding & Moabit  , as well as in a further post at Berlin gegen Nazis.

Events and actions on March 21, 2017 – International Day for the Elimination of Racial Discrimination

The community center Lichtenberg-Mitte invites to join their guided tour through the neighborhood Weitlingkiez at 16:30 as part of their campaign „Bunter Wind für Lichtenberg. The tour will be concerned with diverse ways of living and mutual respect as a contribution to everybody’s quality of life. The tour is scheduled to start at S-Bhf. Lichtenberg (DRK Familienzentrum).

In Neukölln, a rally will take place at Rudower Spinne (U-Bhf. Rudow), at 17:00, organized by an alliance of diverse actors of civic engagement, trade unions, and parties. The event is the take-off to a further series of events reacting to the right-wing assaults on several initiatives and people acting against racism and right-wing extremism. The slogan is: „Kein Ort für Nazis! – Neuköllner Aktionswoche gegen Nazigewalt und Rassismus“. Further information here.

On April 5, 2012, Burak Bektas, a 21 year old Neuköllner, was shot by an unknown person. Burak was standing at the Bus stop near the Neukölln hospital in a group of friends and acquaintances when the offender approached and started shooting immediately. Two of the young men survived the attack severely wounded, but Burak died. A racist motivation for the deed is very likely, even if the offender remains unidentified to this day.

The film shows research conduced on the deed by a group of Berlin youth. The film screening is followed by a round-table discussion with members of TBB and the filmmakers. The event is not only taking place within the framework of the International Day for the Elimination of Racial Discrimination, but us also part of the ongoing Aktionswoche der Initiative für die Aufklärung des Mordes an Burak Bektaş, which will culminate on April 5, 2017, with the inauguration of a memorial space for Burak Bektaş, funded by donations.