On October 3, 2020, 2500 Berliners protested very successfully against a neo-Nazi march of the extreme right-wing party “Der III. Weg” in Hohenschönhausen, a part of Lichtenberg on the outskirts of the city. Photo: Florian Boillot / Berlin gegen Nazis

In early August, it became known that the right-wing extremists of “Der III. Weg”, thus neo-Nazis very closely aligned with National Socialism, had registered a march in Berlin for the first time. Seven Partnerships for Democracy from the Berlin districts, together with Berlin gegen Nazis, informed numerous initiatives and organizations in nine Berlin districts about the upcoming march of the III. Weg on October 3, based on the assement of the situation by Mobilen Beratung gegen Rechtsextremismus Berlin – MBR.

As soon as the location of the march was known, thousands of local residents in the Ostsee-Viertel in Hohenschönhausen were handed out flyers by local organizations to inform people living in the area about the upcoming October 3rd and to make them aware of the possibilities of participating in the counter protests.

Many actors in the neighborhood prepared statements against neo-Nazis. In addition to protest banners along the marching-up route, the day before the marching-up, residents prepared the opening location of the neo-Nazis at the S-Bahn station Wartenberg with chalk messages against racism, Nazis and supporting the campaign Bunter Wind für Lichtenberg. The neo-Nazis had to wait for hours standing on these messages on October 3, because the march was delayed. 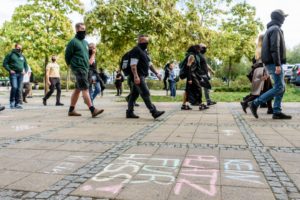 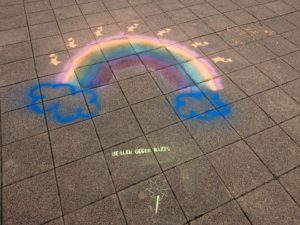 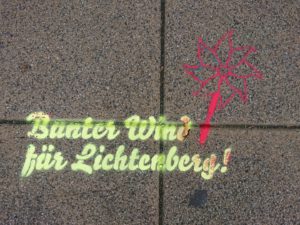 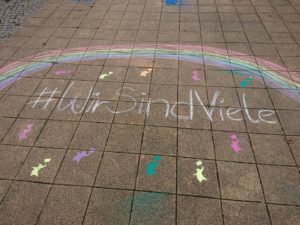 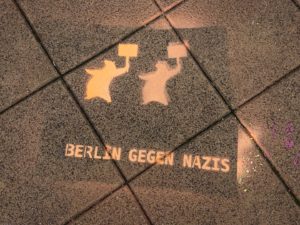 Shortly before October 3, Berlin against Nazis provided an overview of the Berlin-wide mobilization for protest in solidarity with the affected residents in Hohenschönhausen in a guest article entitled “Zusammenhalten gegen Rechts” in the daily newspaper taz:

The preparations for the joint protests against the neo-Nazis thus strengthen the democratic civil society of Berlin as a whole. Even before Hohenschönhausen had been oficially announced as the location of the march, preparations for the protests had already begun in eight other districts. If the respective district is not affected, these preparations help to support the other districts as neighbors. On October 3, there were calls for protests and joint trips to Lichtenberg, for example from Treptow-Köpenick, Neukölln, Friedrichshain-Kreuzberg, Mitte, Pankow and Marzahn-Hellersdorf. (…)

On October 3, residents protested for hours and loudly from adjacent buildings at the Wartenberg S-Bahn station against the delayed neo-Nazi march. The joint public transport journey to the broad counterprotests in Hohenschönhausen itself was the reason why the neo-Nazis had to wait for hours for the start of their march. 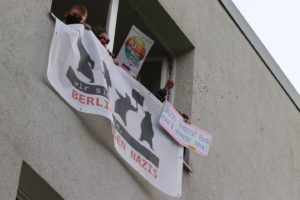 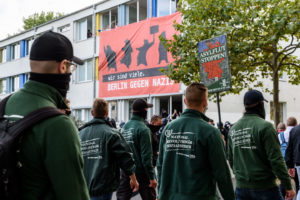 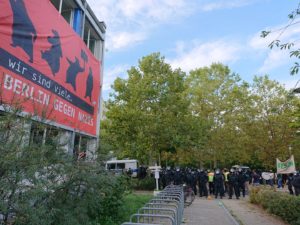 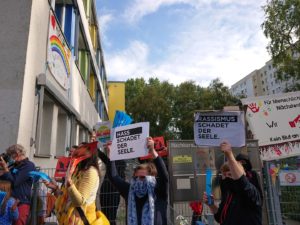 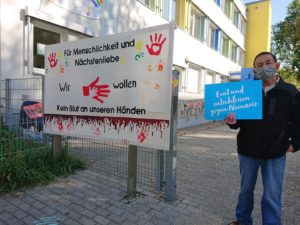 The protests of Berlin’s civil society against the neo-Nazi march started already in the morning with an opening rally with about 750 participants at the train station Lichtenberg. This rally was organized by the alliance Bündnis für ein weltoffenes und tolerantes Berlin with Lichtenbergers of the alliance “Bunter Wind”. In addition to a speech by the district mayor and musical contributions by Mal Elevé, among others, representatives of the Alliance spoke, including the Diocesan Council in the Archdiocese of Berlin, the DGB Berlin-Brandenburg and the Humanist Association Berlin-Brandenburg. Representatives of Omas gegen Rechts read out greetings from all over Germany. From there, the participants of the rally made their way together to the counter-protest rallies in Hohenschönhausen. 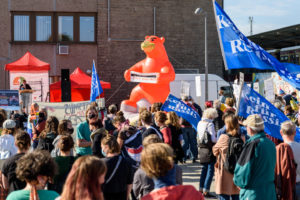 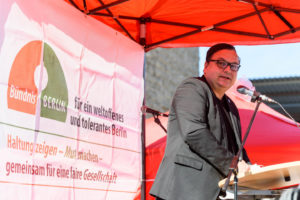 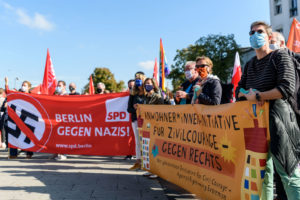 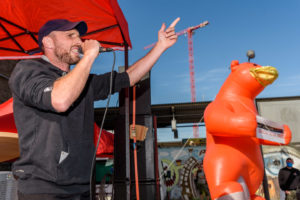 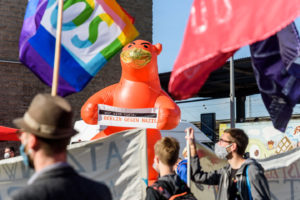 Simultaneously, about 1,000 people made their way from another meeting point to the Ostsee-Viertel district on the outskirts of the city. Further hundreds of people arrived with a bicycle parade of Reclaim Club Culture, an alliance from the club scene.

Several hundred participants gathered at noon at the central “Bunter Wind für Lichtenberg” counter protests at Linden-Center. This colorful rally, which lived up to its motto, was significantly supported by Fach-und Netzwerkstelle Lichtblicke. Speeches were held by Bundestag Vice President Petra Pau, Fridays for Future Lichtenberg, a representative of the Stolpersteine Lichtenberg working group and politicians from various parties in the district, among others. Suli Puschban and Mal Elevé provided musical entertainment for young and old. 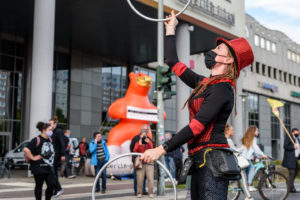 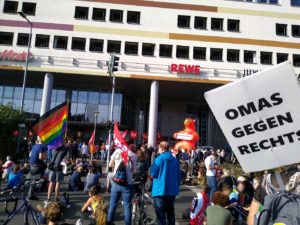 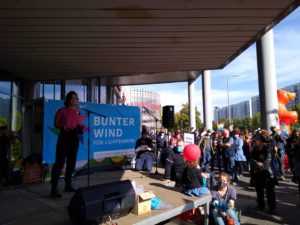 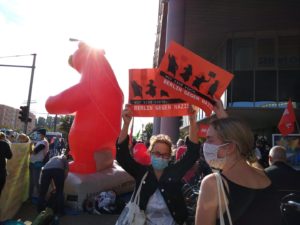 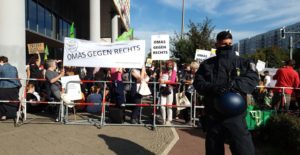 The Berlin Alliance Bündnis gegen Rechts and an alliance around the Berlin Association of Persecuted Persons of the Nazi Regime – Association of Anti-Fascists VVN/BdA positioned themselves with further rallies directly at the planned marching-up route of the neo-Nazis in the Baltic Sea district, which were headed for by many participants in the counter protests. A large number of these people spontaneously decided to protest along the marching route. After hours of waiting, the neo-Nazis could therefore only march 500 metres along their planned route. After a further long wait, a few hundred right-wing extremists finally walked along a short alternative route and remote park lanes back to the starting point at S-Bahn station Wartenberg. 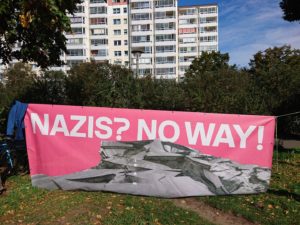 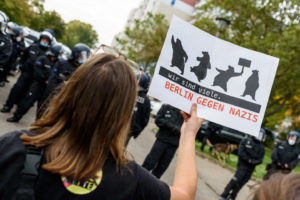 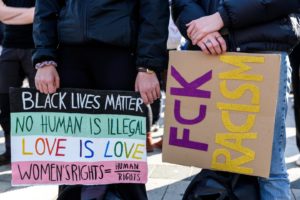 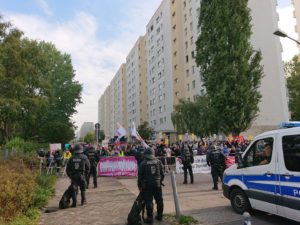 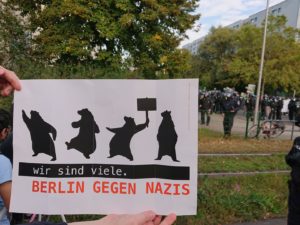 On October 3, Berlin’s civil society did not leave the residents of Lichtenbergers and in particular Hohenschönhausen’s Ostseeviertel neighborhood alone with neo-Nazis. A broad mobilization ensured that “Der III. Weg” did not enjoy their first attempt at marching in Berlin. The protests gave a clear signal: Neo-Nazi marches glorifying National Socialism and thus representing attempts to destroy the city’s democratic culture and diversity must expect broad protests in Berlin. Affected residents, the district, Berlin-wide alliances of committed individuals, and initiatives from the other side of the city stand united against Nazis.